Back to the JURASSIC ERA!

Joining our large scale animal appliqué patterns are some Jurassic era critters! We are so excited to launch our Danny’s Dinos pattern and cannot wait to see what you all make with them! We’ve toyed around with the idea of doing another large scale animal pattern but were apprehensive about finding a printer (we haven’t done any of the large scale printing since we move to WA state). Once we got that resolved, we knew the next set would be the youngest of our family’s favorite species - DINOSAURS! We had so much fun sketching these characters out and made them as large as possible, for quick and easy appliquéing. Like all of our large scale animal patterns (Zoey’s Zoo, Sammy’s Safari and Finley’s Farm), there are 4 different characters included in the pattern. You get a T-Rex, Brontosaurus, Stegosaurus, Triceratops and full alphabet, full-size, reversed and ready for tracing for appliqué! We always love to include the alphabet so you can personalize these quilts with the child’s or baby’s name - they love seeing their name on quilts!

For our cover quilts, we had some punny fun with the names =] They all make me giggle a little! Do you have a favorite? Comment below to let us know! We had a fun little backyard photoshoot with these bright quilts. We pulled our painted doors out of the shed and snapped away! And like always, we had some furry photoshoot crashers. New to the party, is Shadow, our newest puppy! He is a beautiful and goofy Husky, Malamute and German Shepherd mix. 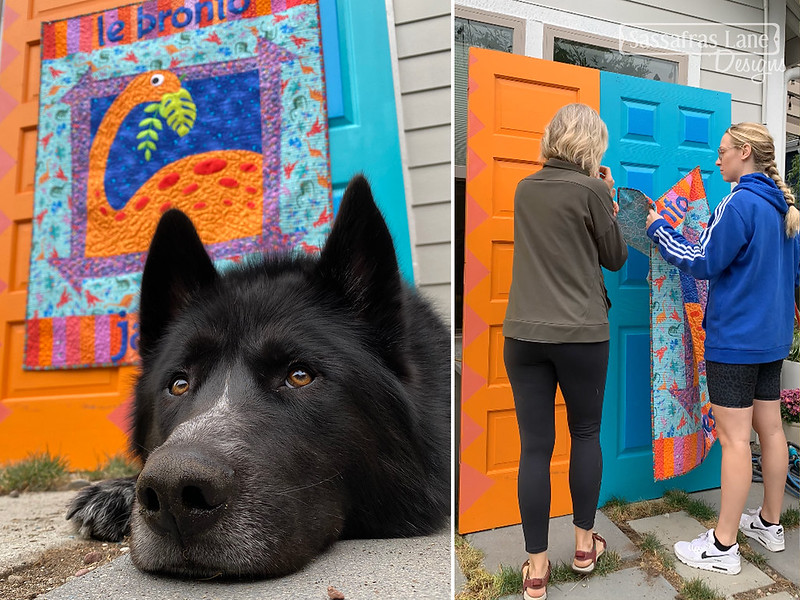 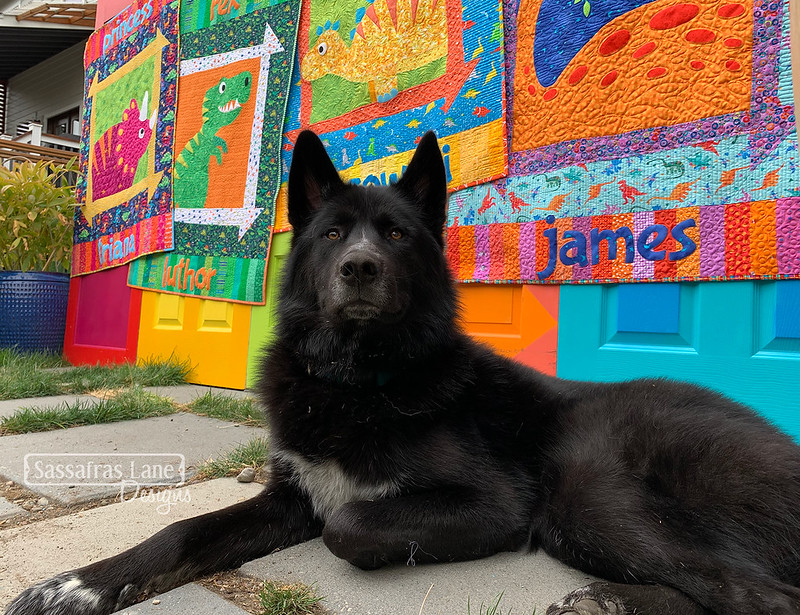 If you have any of our previous large scale animals, you know the drill - adorable creature in the center, funky churndash border, appliqué name and optional scrappy top and bottom border.
This time, there are 4 fun dinosaurs in place of animals!

Kristy laid out one of the pattern inserts when they arrived from the printer and Crosby came trotting over to claim the "new bed." We think this is his version of the paw of approval! (And don't worry, this is now our personal insert!) 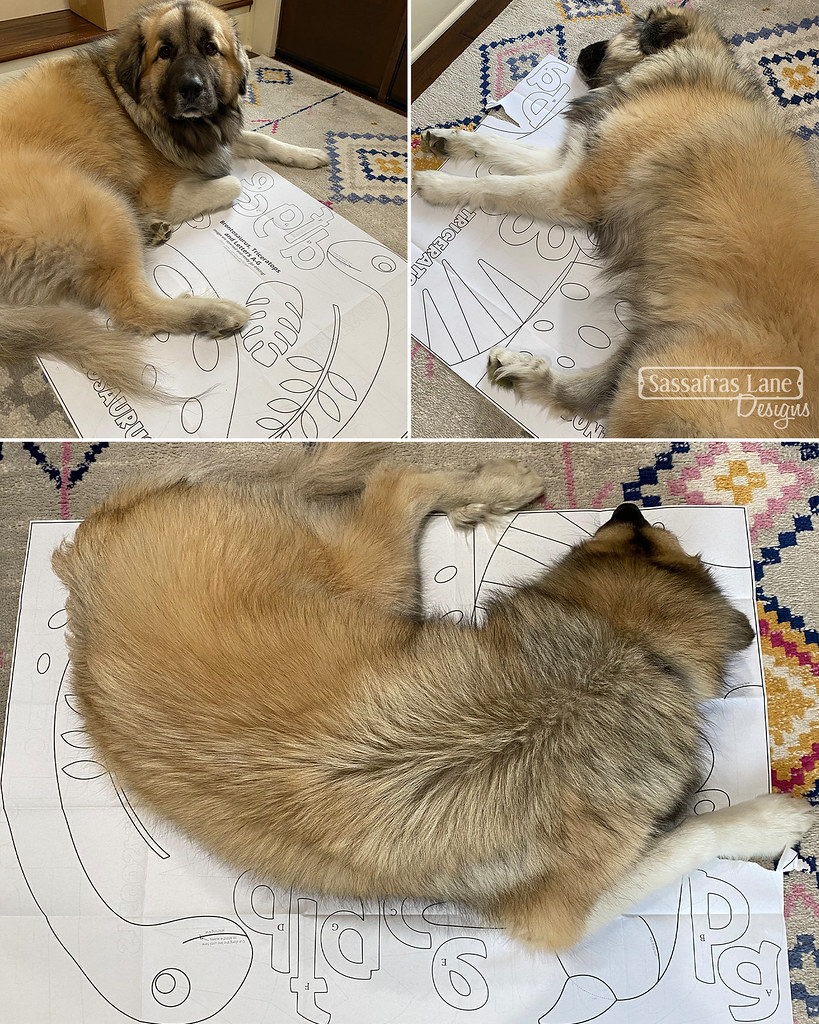 Oh LeBronto James, how cute are you?! Now unlike his namesake, we don’t think this dinosaur can dunk a basketball, but they are both very tall! Brontosaurus’ are my favorite dinosaur. I love the idea of giant veggie-eating creatures stomping around all peaceful. We gave LeBronto some leaves to chew on and think it adds to his absolute adorableness! 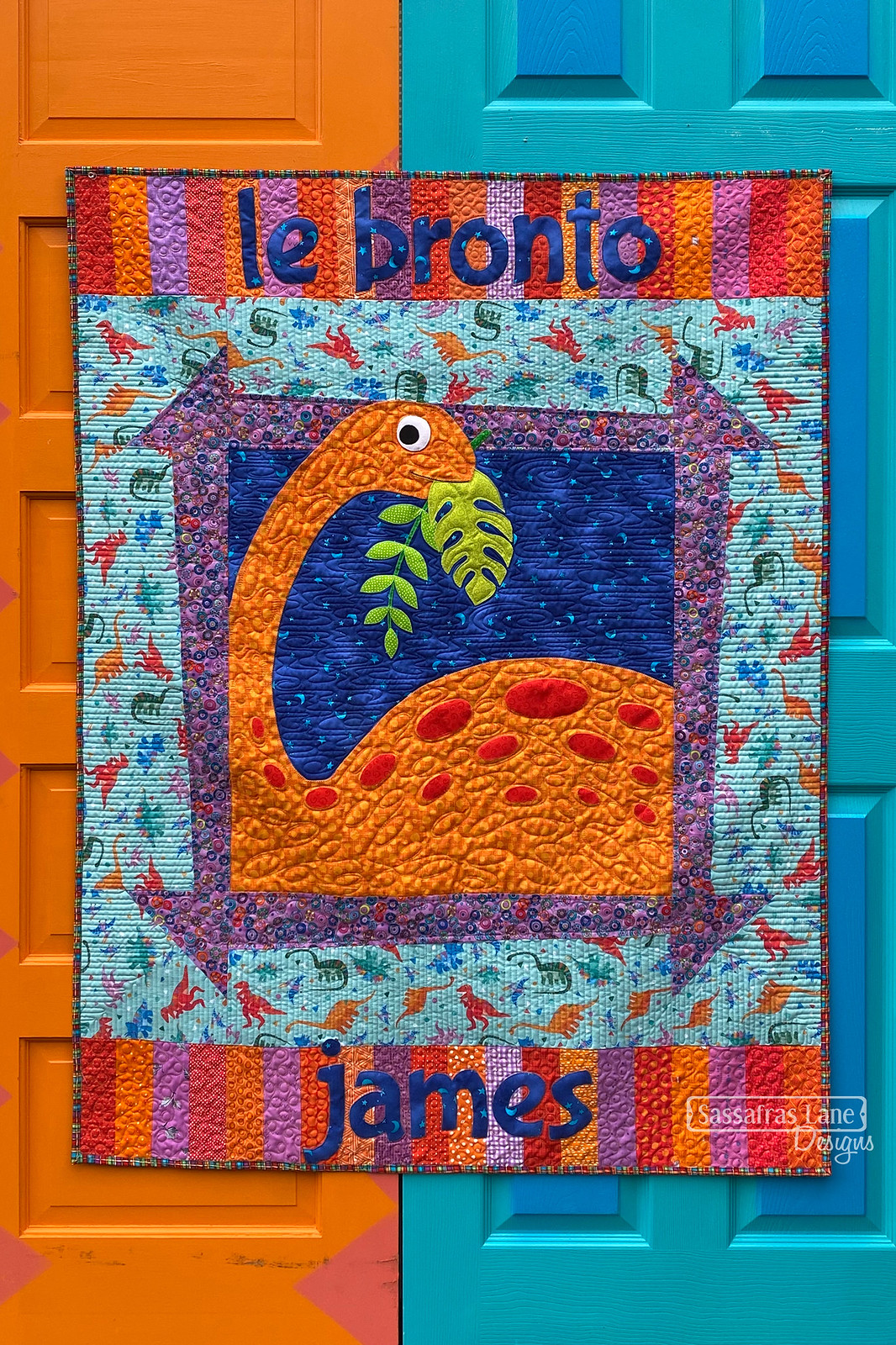 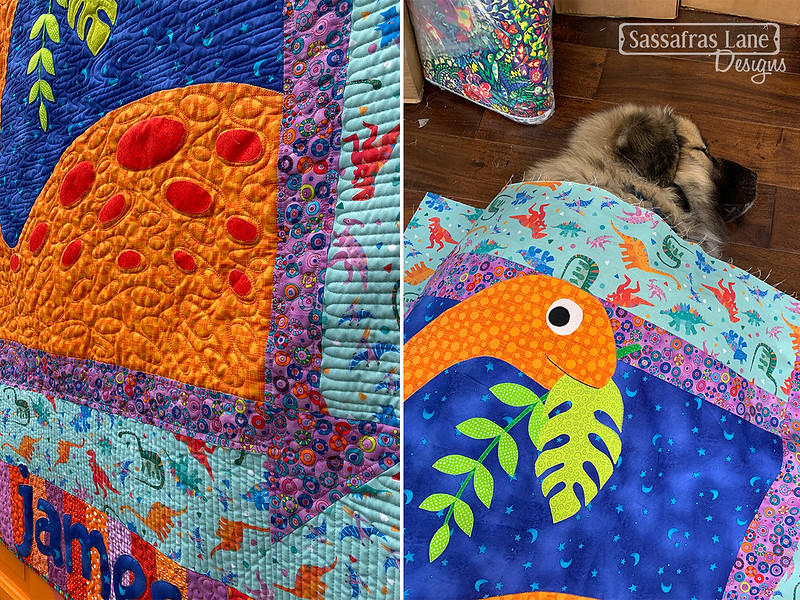 A google search did help me name good ole Spike here, but the more time passes, the more I think it might be the best name of the bunch. If you are a Monsters Inc. fan then you already know! This is also maybe my favorite dinosaur of the set! This flashy dinosaur feature spikes all down his back, head and tail AND had some great back stripes! 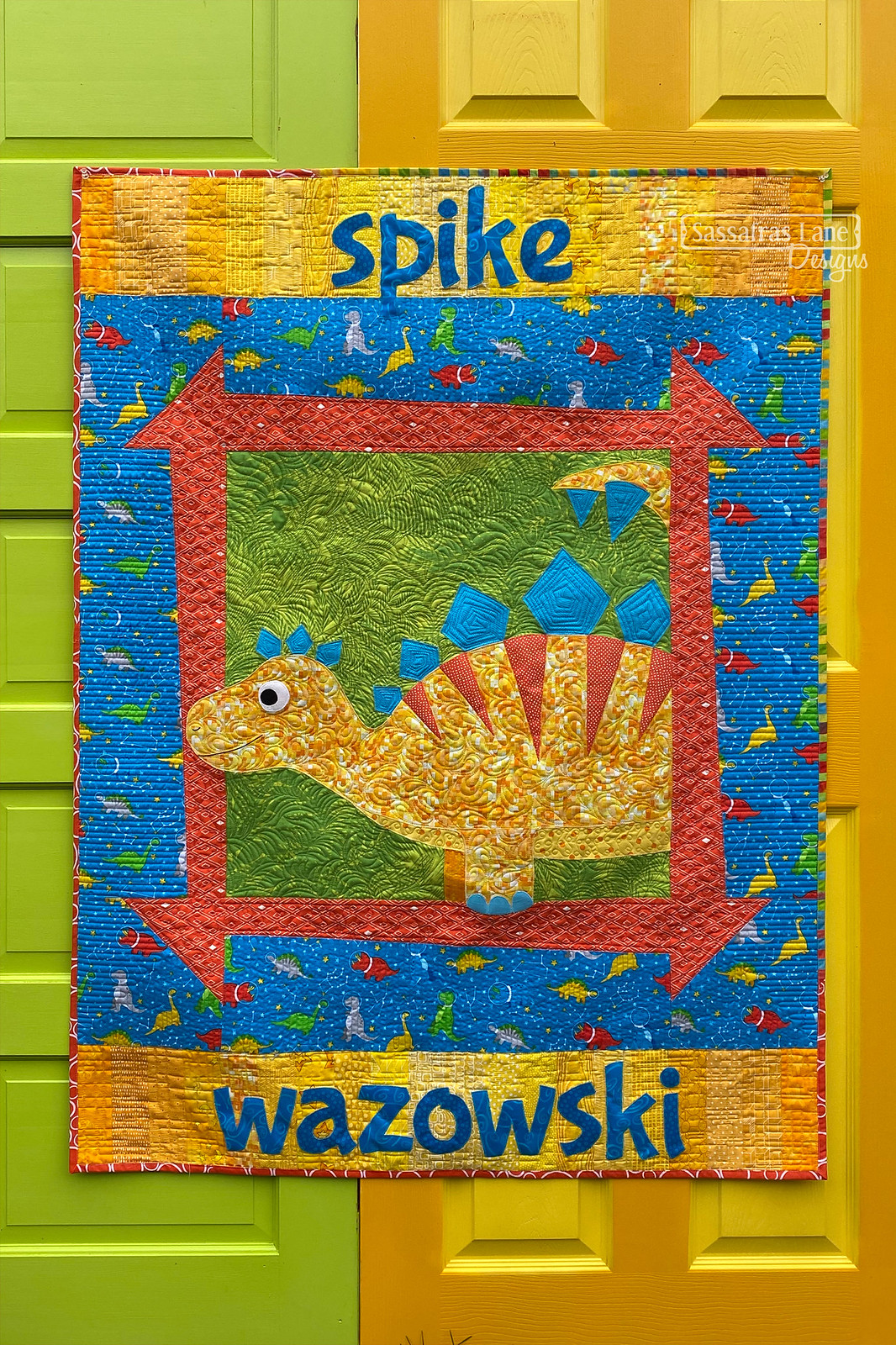 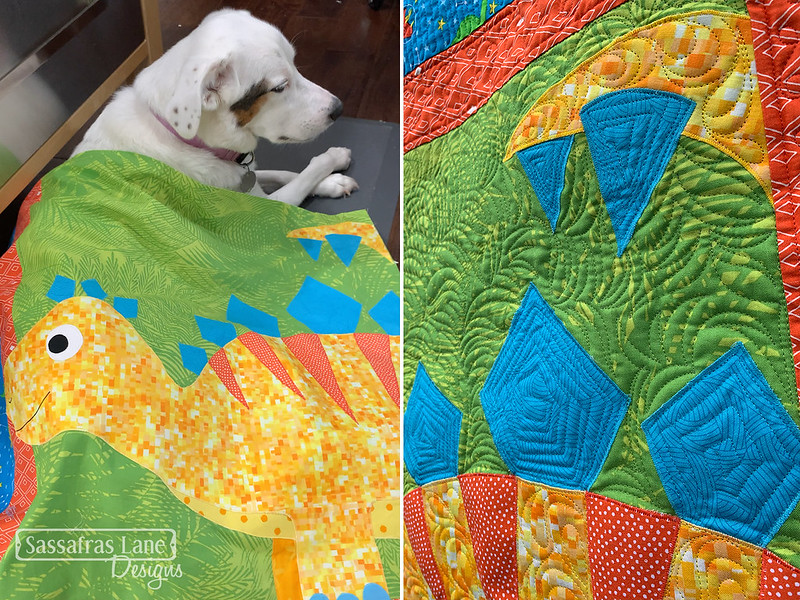 Someone commented on our Instagram sneak peek that they love this specific dinosaur because dinosaurs are NOT just for boys! And we wholeheartedly agree! Dinosaurs are for anyone and everyone. We named Princess Triana after the beautiful Princess Diana - mostly because the names worked, but also they both wore a crowns! 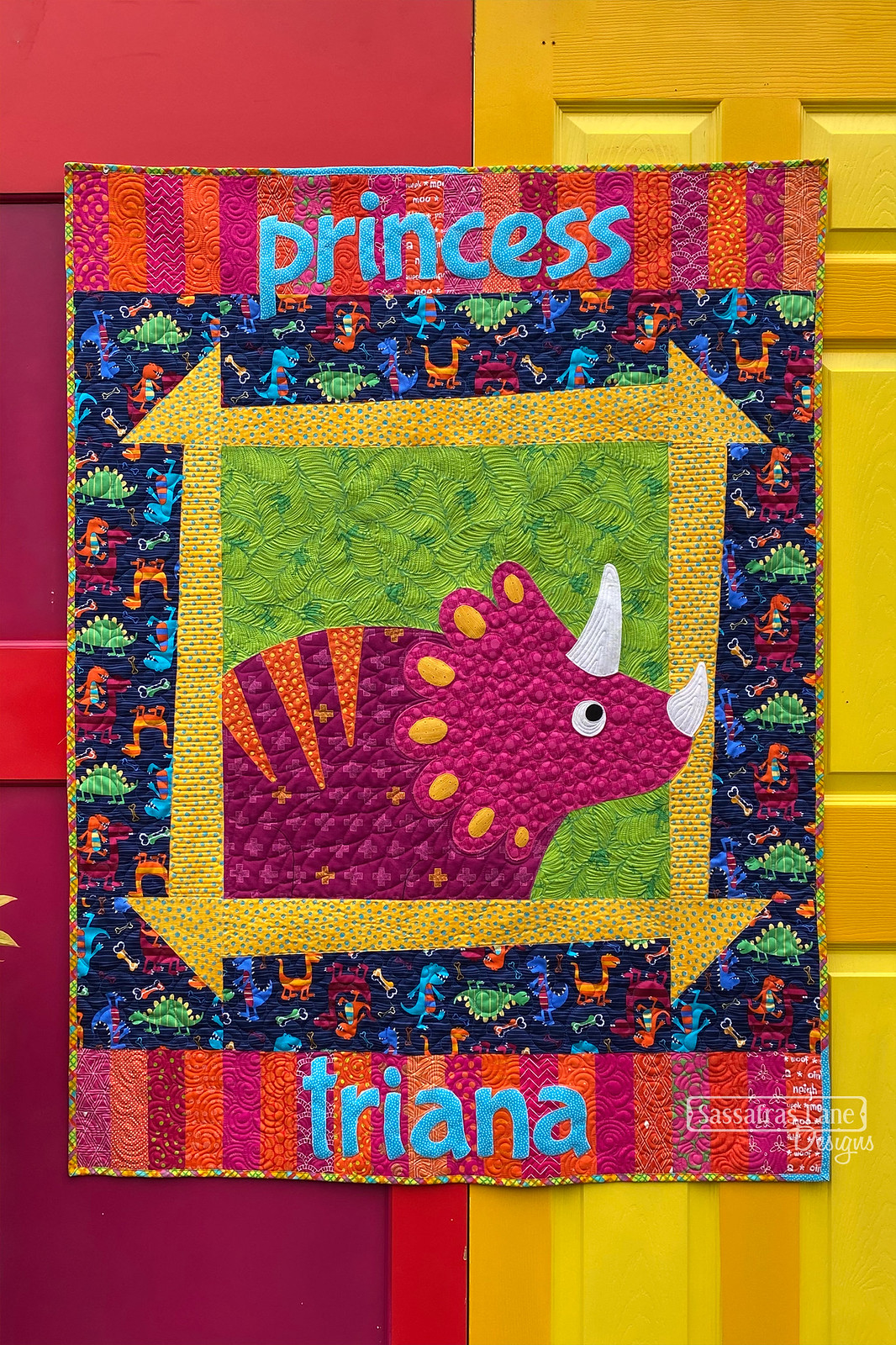 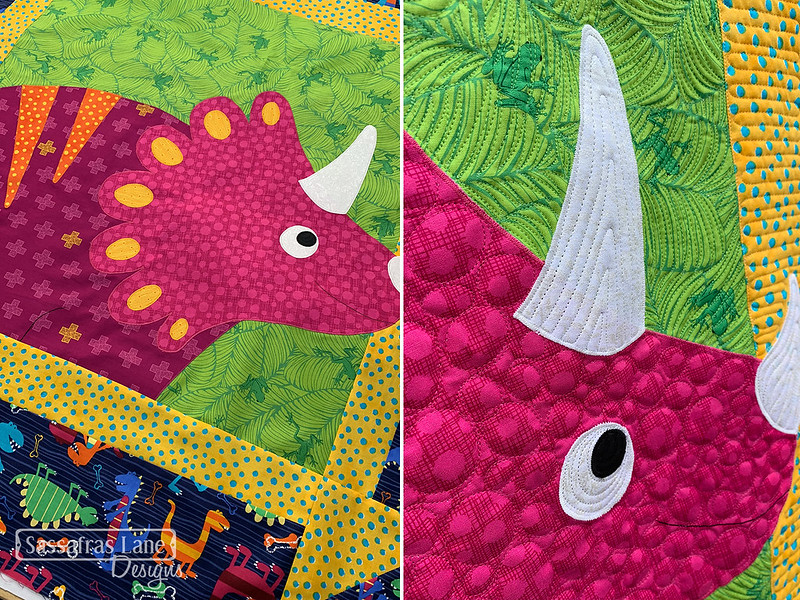 Named after the infamous arch-nemesis of Superman, it felt like it suited him. Not sure if he just gets a bad rep, but the T-rex seems to have been the bully of the Jurassic era. Knowing that, we attempted to make him the cutest bad guy we could! He still has his slightly menacing teeth but I think his little alligator arms would be great for hugs! 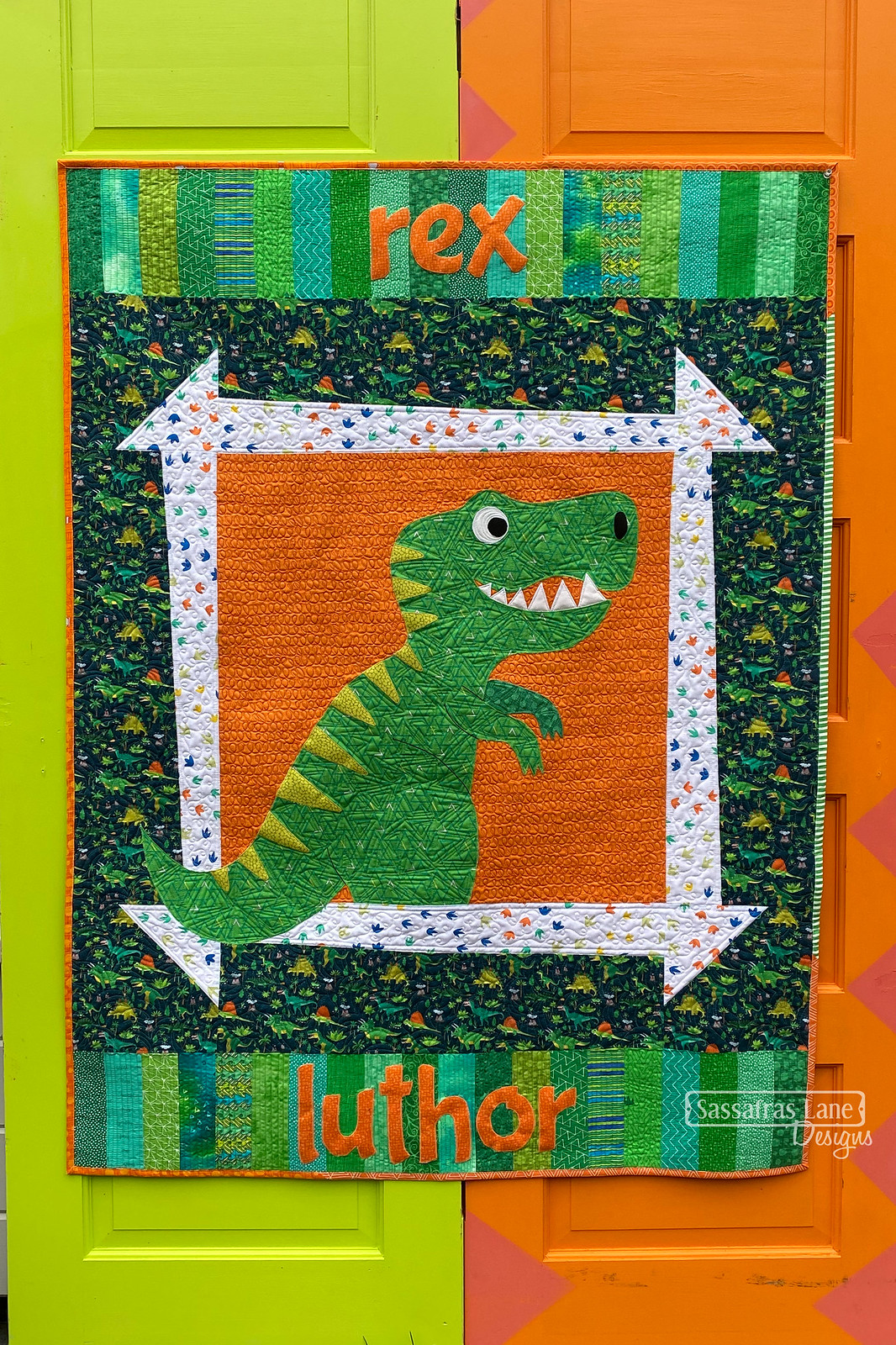 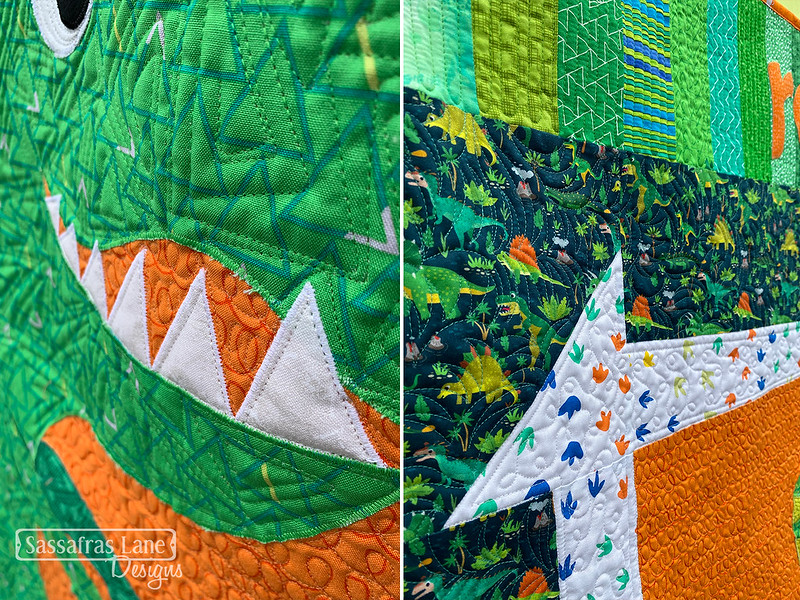 If you make a project from Danny’s Dinos, be sure to post it to social media with the hashtag #DannysDinos so we can see and share it! Happy sewing =]

I just love all of them, they each have their own personalities, you have done another wonderful job.